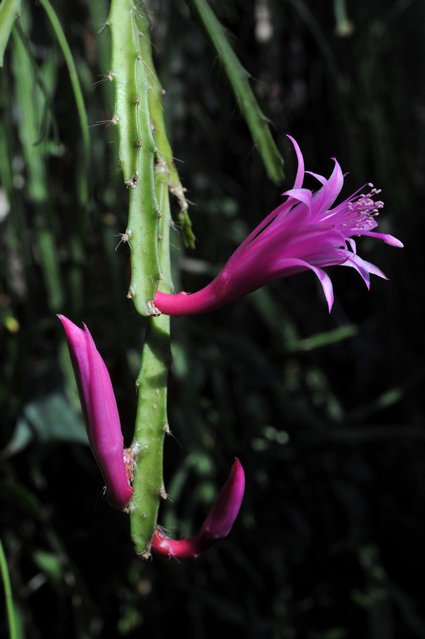 These notes concerning the genus x Aporophyllum are purely historical-taxonomical and can be omitted by the reader more interested by the only contemplation of the blooms!

Formerly I believed that Aporophyllum resulted from the crossing between Aporocactus (aporo) and botanical or hybrid Epiphyllum (phyllum).

It was a quite naive vision of things. The genus Aporophyllum or x Aporophyllum since this genus only made up of hybrids is composed of plants which have all in common cylindrical or ribbed stems with at least three ribs and whose blooms look more or less like blooms of Aporocactus often with a bigger size. But the pedigree of an Aporophyllum is often extremely complex and can include 5 or 6 different genera.

It would be besides simpler and more logical to speak about "Epicactus" or (x Epicactus) for any hybrid cactus containing at least an epiphytic cactus in its pedigree.

As I explain it in detail in my article on the history of Aporophyllum, the genus x Aporophyllum is in addition botanically invalid.

But rather let us continue to look more closely at the blooms of this splendid plant.