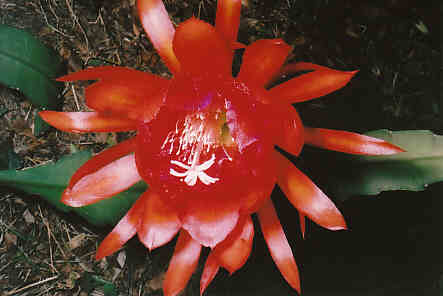 What a surprise when I took out « Letty May » into my garden in July 2011, for the summer ! Its bloom was not the same !

I first thought that a label had been changed pots by mistake, then, intrigued, I wrote an e-mail to my friend and collector Etienne Haugedé to ask him what he thought of this variation of colors. He told me that he had obtained striated blooms on the same plant of “Letty May” and during the same year but early in the season and blooms identical to the bloom of this page late in the season, during a warmer period. He also thought that the plant was infected by a phytovirus (mosaic).

The following photograph confirms the assumption of the viral infection.