A SPORT OF EPIPHYLLUM X " SO NICE " 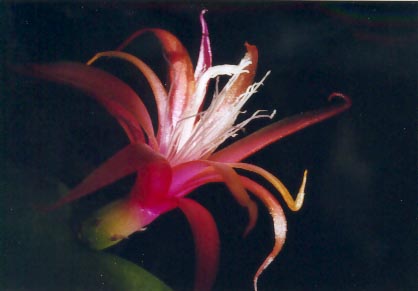 In 1994 I bought three cuttings of Epiphyllum X "So Nice" from Rainbow Gardens in California. "So Nice" is a hybrid created in the 1980s by Wressey Cocke ; Disocactus nelsonii is present among its botanical ancestors.
It normally produces flowers whose petals are approximately 5 to 7 cm long. The innner petals have a pale yellow colour ; outer petals are reddish (normal form bloom photo : bottom left on this page).

Since Spring 2001 , I noticed that one of the three cuttings produced unusual and very interesting blooms (this is my point of view). The unusual bloom size is half and even the third of the normal blooms size. Petals and stamens often take a crumpled aspect, the red colour gets the upper hand over the yellow colour for the unusual bloom. The photo at the top of this page shows this unusual bloom. This is a sport of Epiphyllum X "So Nice".

I immediately wondered wether this mutation was stable and I marked with a black felt pen the stem on which the unusal bloom had appeared. To my great joy, I observed one year later the same unusual blooms on the same stem. During Spring 2003, the young floral buds have had the same unusual shape. In 2003 I noticed the same sport bloom for the third consecutive year. I also observed some blooms which have an intermediate aspect between the normal blooms and the sport's ones.

I wrote in the English review : "Epiphytes", Volume 26, issue 101 (alas the last issue published !), an article about this sport. I'm trying to propagate it. I observed the last sport flower on a cutting during Autumn 2006; thus, the mutation has still been stable since 2001. I'm thinking of naming it : Epiphyllum X 'Rouge Michel Combernoux'.

And to conclude, I put here two photos one next to the other. The left-hand side photo is a general view of the stem on which the sport blooms first apparead. 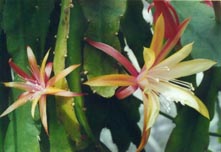 In 2002, I wrote to Chuck Everson (Rainbow Gardens) who told me that he had never observed a sport of Epiphyllum X 'So Nice' in his collection.